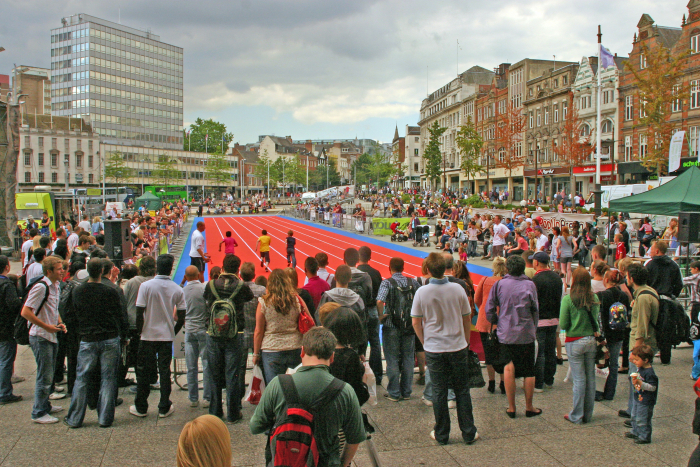 A partnership between Nottingham City Council Sport Development and Nottinghamshire Police wanted to provide an activity to target disaffected young people, particularly those from some of Nottingham’s most deprived wards. The idea behind delivering a Street Racing event was inspired by the 150m street race held in Manchester in 2009 featuring Usain Bolt. We felt that an activity that required very little equipment and expense for young people would be an ideal way of engaging them.

Having decided on the type of event we wanted to deliver, we now needed to engage with young people. Nottinghamshire Police did this through delivering local Street Racing events in communities, by closing down a street in a local neighbourhood and allowing young people from 8 to 19 years to compete in races on their doorstep. These events were very well received with 5 delivered across different communities engaging almost 100 young people at each event.

From the success of the localised events, Nottingham City Council Sport Development, with Nottinghamshire Police and Notts Athletic Club delivered a city wide Street racing event in the Market Square. To create real impact and a highly professional “arena” for the event to attract hundreds of passers by in the city centre, we worked with PopUpArena who provided a package including an 8 lane 60m track, grandstand and team benches. This alongside a professional timing system for the event greatly enhanced the participant experience. Additional activities to engage young people in further sport and physical activity opportunities included a climbing wall, a street football arena and additional athletic events such as high jump and standing long jump.

The event was marketed to previous participants of the local Street Racing events as well as broader citywide marketing in schools and targeted promotion to community groups and organisations such as Catch 22. In addition to this Nottinghamshire Police referred young people to the event through its outreach community programme.

The event and project overall has been very successful. The citywide event attracted over 300 young people as participants and hundreds of spectators added to the exciting atmosphere. At the event there was a considerable amount of interest in getting involved in athletics and young people were signposted to Notts Athletic Club as a pathway to continued participation.

Following the acknowledged success of the event, a Street Racing Academy has been established. This is a weekly athletics session, primarily aimed at disaffected young people that have an interest in athletics but may not want to be part of the formal Notts AC setup. These sessions are led by Notts AC and Nottinghamshire Police, with support from Nottingham City Council. 20 young people regularly attend these sessions, and have made considerable progress in the sport, with many now starting to compete in regional competitions.

Following this success the Street Racing event will again be delivered in Nottingham’s City Centre in 2011, with further plans to expand the Academy and integrate many of these young people into Notts Athletic Clubs performance teams.

The participants from the Academy have all shown a very high level of dedication and commitment. They deserve most credit for this when the image of most young people from similar backgrounds is less favourable. Within an extremely short time several individuals have developed physically to a level where they are ranked within the top 500 athletes for their age and gender. They have done this despite being overlooked by their schools and local community.

The impact of a professional athletics arena “literally popping up” in the city centre, played a huge part in attracting many young people on the day, something that wouldn’t have been possible without the visual drama the infrastructure supplied by PopUpArena.

Combined with the dedication and support from officers from Nottinghamshire Police and their drive to make a positive impact on the lives of young people, the whole experience was successful.

“PopUpArena transformed the city centre square into a real athletics track for kids to race 60 metres. It was really dramatic, exciting and inspiring.” 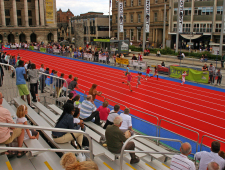 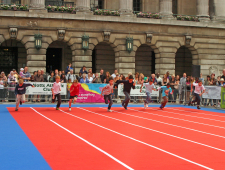